We cannot claim to know it all. We are raised from the west but expand our minds enough to realize this isn't all there is out there. For years, decades, and centuries native or indigenous cultures have been suppressed, and with their loss of home comes a loss of culture, language, religion, and all of the knowledge that goes along with it. Their way of living was fundamentally different from ours and thus it was discredited as inferior, and their knowledge was not accepted as legitimate. This was, put simply, a mistake.
"The [Nature/Culture] dichotomy makes it seem like common sense that parks must be set aside from people, and that real nature is not found in cities." - Dove/Carpenter Reading
The Nature/Culture dichotomy is a common oversimplification of the relationship between humans and their environment, and one that exposes key differences between the traditional "Western" school of thought and that of most indigenous cultures. This dichotomy stems from a concept characterized by Descarte’s most famous quote: "cogito ergo sum" (I think therefore I am). This idea that humans are special because they think; they recognize this self asserted crown in the hierarchy of the animal kingdom as a trait that completely separates the human being from "nature" and thus that being's environment. The person is the subject and all else: rocks, animals, plants, water are objects. (Subject/Object Dichotomy)
As a civilization we observe natives. "Cultural Voyeurism" is the term Andy Isaacson (Travel Journalist) writes in his New York Times article "Amazon Awakening." We think it's a fitting term (although we find fault in other aspects of the article). A Voyeur watches something with no intent to partake—no desire to "walk in their shoes."  We observed, but we didn't learn from them. “They live in harmony with nature” sounds corny, so we won’t use it instead: they live in cooperation with nature. In Darrel Posey’s “Indigenous Management of Tropical Forest ecosystems: The Case of the Kayapó Indians of the Brazilian Amazon” it is brought to attention that these forests – not even just forest patches – and several islands were anthropogenic in nature. The Kayapó not only did not harm their environment but they enhanced it, they increased biodiversity by who knows how much, and they lived with the mosaic, natural looking environment they had managed for so long. Professor Devon Penã at the University of Washington calls this way of life “Living like a Beaver.” A beaver will alter its environment, develop a home for itself, but in doing so it creates a new environment that holds a place for other life forms, therein increasing biodiversity. The Kayapó’s way of life and relation to their environment is only one example proving that man mustn’t necessarily live in competition with nature. 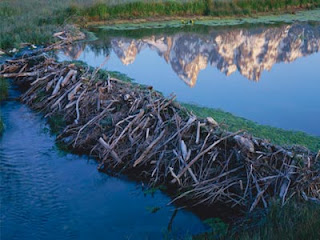 Although some may argue that Nature/Culture Dichotomy is needed and in fact relevant to the evolution of Western Culture, Dove and Carpenter point out an equally opposing argument with the notion that the local place based cultures can actually assist the environment. The Guinea island forests are other prime examples of this anthropogenic "assistance. Unfortunately western misconceptions have tarnished the acknowledgement of generations of increased biodiversity made possible by the first nations in Guinea. This again is evidence that the whole concept of the Nature/Culture Dichotomy is flawed because not all people choose to live separate from the environment.
Beyond the preservation of other species, it would be in our own best interest as humans to recognize the “Co-evalness,” (another of professor Penã's terms) or mutual determinism, of our culture and the environment in which we live.  One undeniable fact about humanity is that we must live in some kind of environment—there must be something that provides our food, our air, our water, etc.  If we see the environment as something that must be bent to our will, as an enemy to be bled for resources rather than as an ally to cooperate with, we will destroy our environment and thus destroy ourselves.
Humanity and nature do not form a binary – forever cast to the opposite ends of the spectrum. Competition with nature can cease and give way to cooperation; the so-called “common sense” in separating the place of habitation from the place of nature may one day be laughed at.